Since its formation in 1967, ASEAN has grown from an underdeveloped region into one of the globe’s most diverse and dynamic economic drivers. Located at the heart of the Asia-Pacific region and strategically nested across several major trade routes, ASEAN is bursting with investment opportunities.

In its Investment Report last November 2018, the ASEAN Secretariat reported that foreign direct investment rose to record levels underpinned by significant rise in investment in the region. The report examines ASEAN’s rapidly growing digital network backed by expanding digital networks. With foreign and ASEAN digital MNEs and ICT companies increasing their attention to the region, member states are intensifying cooperation in order to strengthen and expand e-commerce and facilitate digital connectivity. This includes the execution of an ASEAN e-commerce agreement and adoption of an ASEAN Digital Integration Framework with the aim to facilitate transformation of the region into a competitive global digital hub.

ASEAN member states have not neglected the importance of making business more streamlined and less restrictive to foreign stakeholders within their respective jurisdictions. These efforts are reflected in the pages that follow, where you will notice a trend in liberalising business sectors, easing the process of doing business and increasing the available investment incentives across the region.

In addition to all this is ASEAN’s underlying commitment to becoming the primary trade bloc for free trade and competitive pricing. This commitment is mirrored by its entry into a number of global free trade agreements, though even with the coming into force of the Comprehensive and Progressive Agreement for Trans-Pacific Partnership there are still uncertainties to its application.

ASEAN’s commitment to moving with the times and embracing competition has not only retained the confidence of its existing investors (e.g. many Fortune Global 500 companies continue to invest in the region), it has also convinced a number of major source economies to raise their stakes and increase their investments in the region.

The following is a snap-shot of where ASEAN currently stands in allowing a freer flow of foreign investment and capital throughout the region. 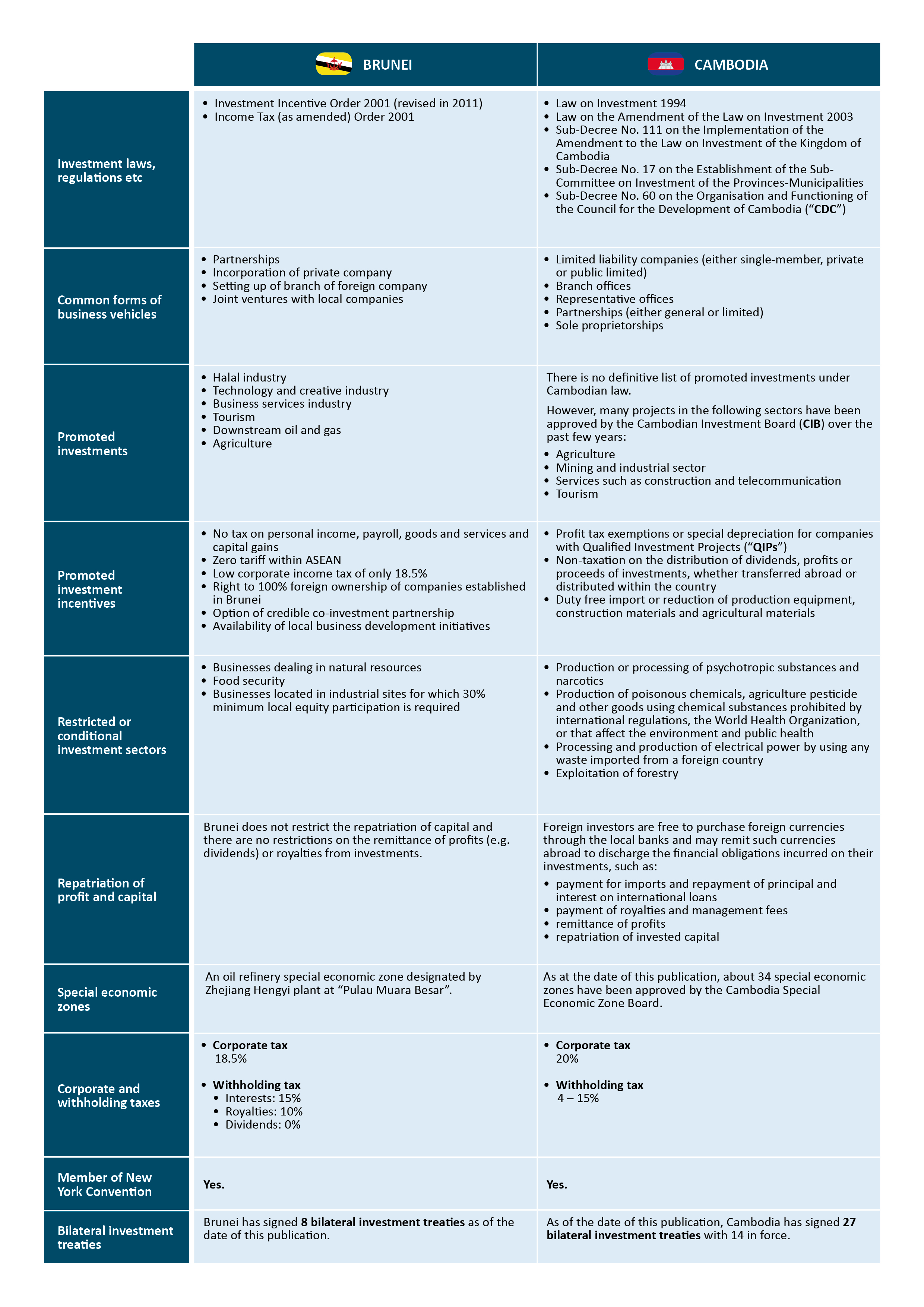 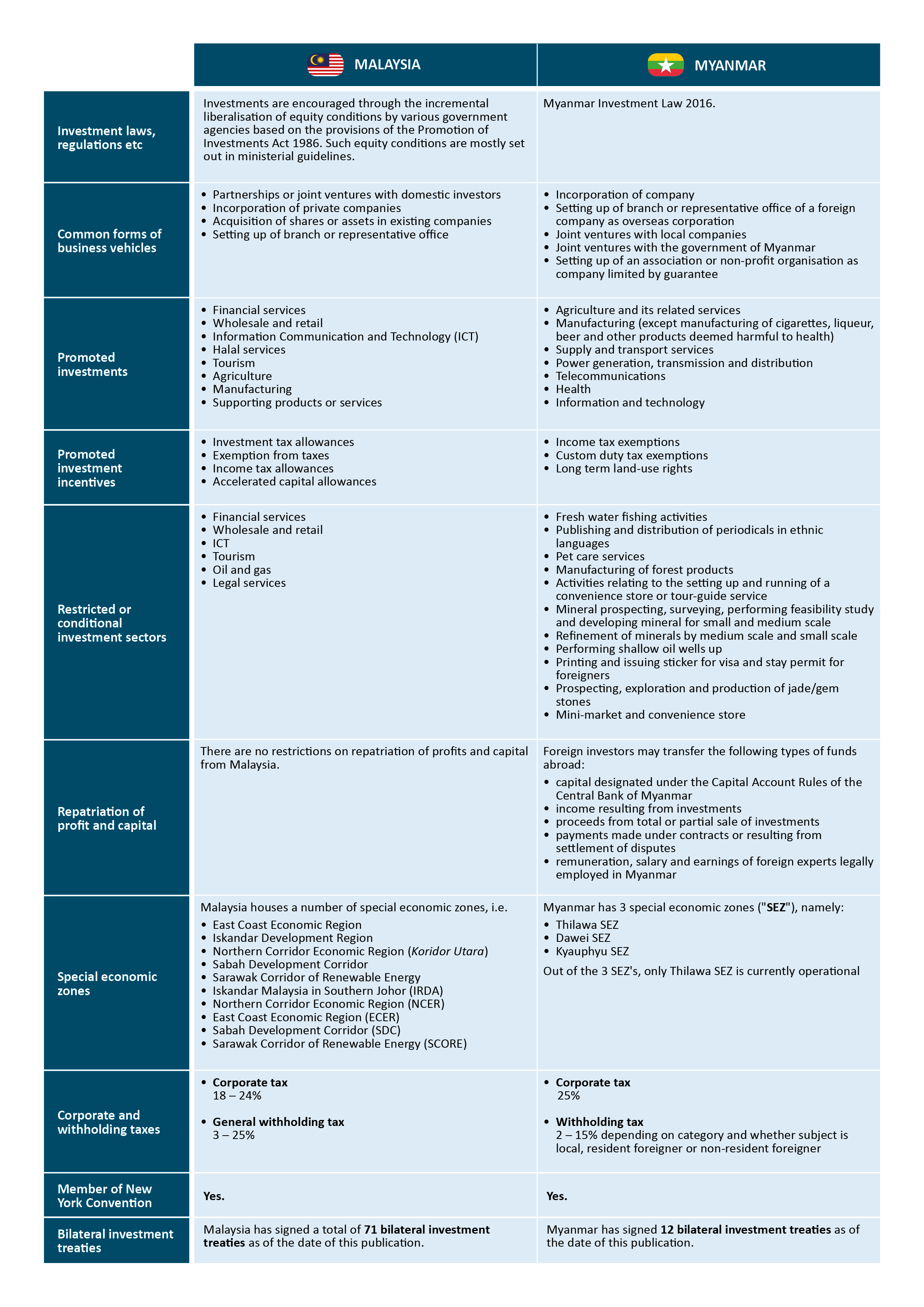 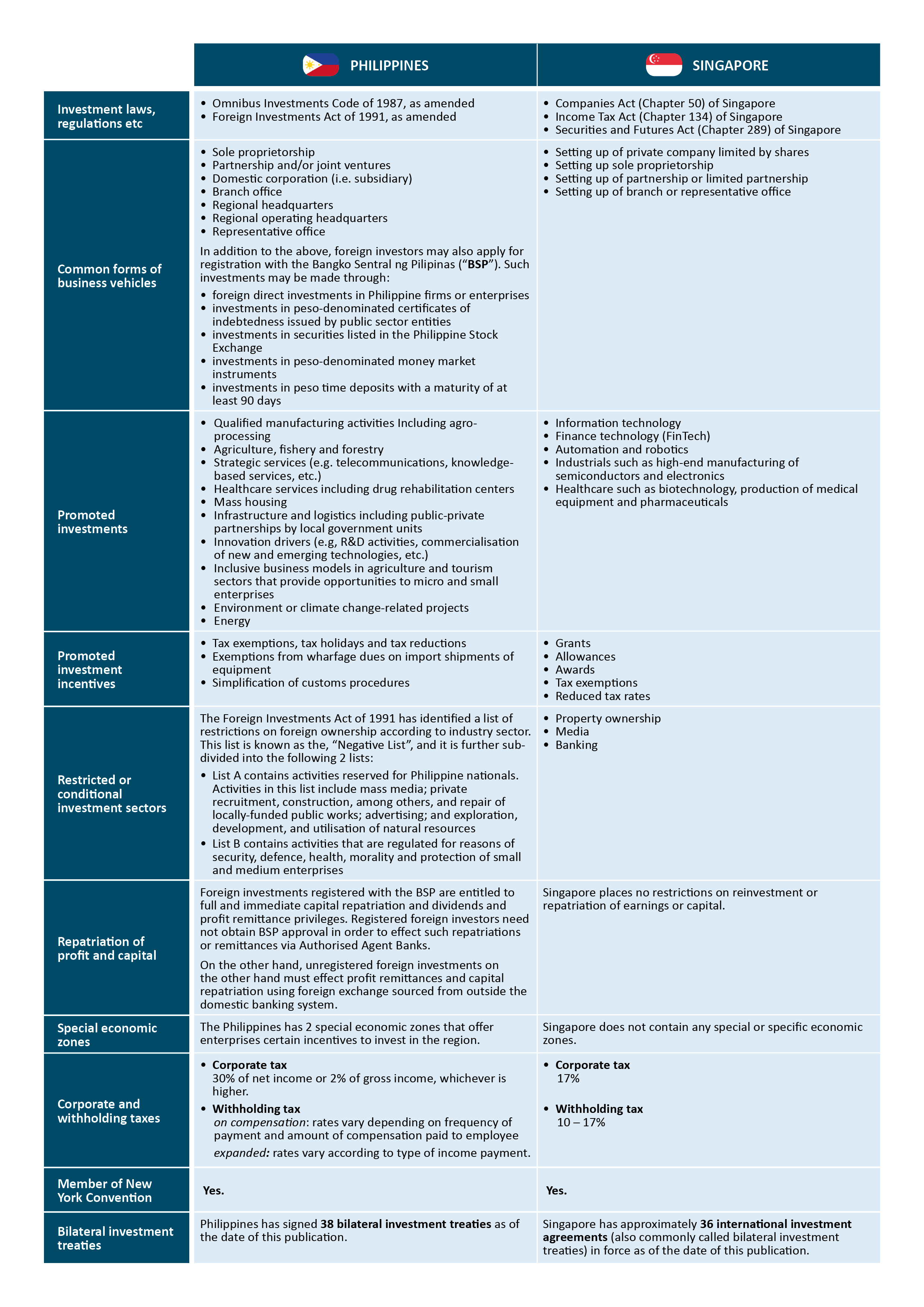 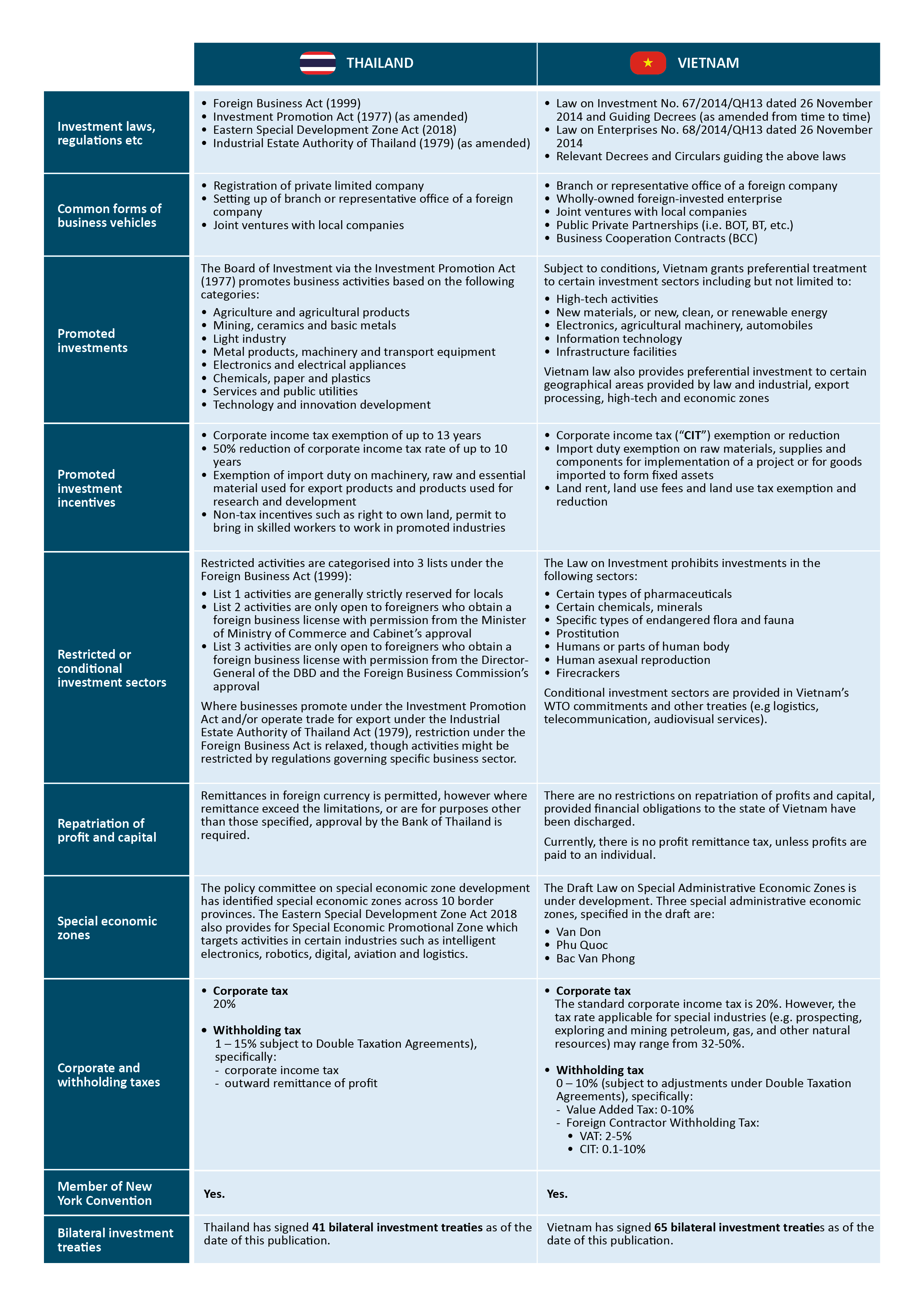 The ASEAN of today is an indispensable trade bloc for many global powerhouses. Its commitment to free trade, competitive pricing and enhanced business and legal conditions is reflected in its entry into a number of global free trade agreements, some of which are depicted in the illustration below.

RCEP: The proposed Regional Comprehensive Economic Partnership or RCEP has a combined GDP of USD17 trillion and a population of 3 billion. All of ASEAN are involved in RCEP negotiations and stand to open their doors to trade in goods and services, investment, economic and technical cooperation, intellectual property, competition policies and dispute settlement with other member states.

ATIGA: Signed in 1995, the ASEAN Trade in Goods Agreement (ATIGA) consolidates and streamlines the provisions of its predecessor, the Agreement on Common Effective Preferential Tariff of the ASEAN Free Trade Area (CEPT-AFTA). ATIGA contains elements such as tariff liberalization, removal of non-tariff barriers, rules of origin, trade facilitation, customs, standards and conformance, and sanitary and phytosanitary measures.

AFAS: The ASEAN Framework Agreement on Services (AFAS) eliminates barriers to trade in services and provides mutual recognition of qualifications and experience through Mutual Recognition Agreements. The AFAS also sets out a mechanism for dispute resolution and rule making.

ACIA: The ASEAN Comprehensive Investment Agreement (ACIA) aims to enhance the attractiveness of ASEAN as a single investment destination by covering benefits in almost all forms of investment, introducing non-discriminatory treatment policies, and promoting the liberalisation of the manufacturing, agriculture, fishery, forestry, mining and quarrying and incidental sectors.

CPTPP: The Comprehensive and Progressive Agreement for Trans-Pacific Partnership (CPTPP) is touted as a “next-generation” trade agreement eliminating or reducing tariff and non-tariff barriers across trade in goods and services, facilitating the development of production and supply chains, enhancing trade and facilitate cross-border integration by opening domestic markets. In short, the CPTPP is marked as the, “revival” of the Trans-Pacific Partnership Agreement (TPP) which the US has withdrawn from in early 2017.

Apart from the above, ASEAN has also signed Free Trade Agreements with China, Japan, the Republic of Korea, Australia, India and the European Union.

The revival of the TPP and its impact on ASEAN

When the United States withdrew from the TPP in early 2017, many thought that the TPP was dead. However, in May 2017, the remaining TPP member states convened to discuss the possibility of reviving the TPP under a new name, the CPTPP.

The CPTPP finally came into force for Australia, Canada, Japan, Mexico, New Zealand and Singapore on 30 December 2018 and for Vietnam 14 January 2019.  The CPTPP will only enter into force for Brunei, Chile, Malaysia and Peru 60 days after they complete their respective ratification process. As they have yet to complete the ratification process, these countries are unable to enjoy the preferential tariff rates for members under the CPTPP.

ZICO Law is the first network of leading independent local law firms with a full presence in all 10 ASEAN countries. With a presence in 18 cities in 10 out of 10 ASEAN countries, our 300 lawyers enable our clients to enjoy value-added legal services by leveraging on a combination of local expertise and regional insights.