On 10 October 2018, the Thai government announced the cessation of the International Headquarters (“IHQs”) program (which also included Regional Operating Headquarters or “ROHs” and International Trading Centers or “ITCs”) and the creation of a replacement initiative; International Business Centers (“IBCs”). 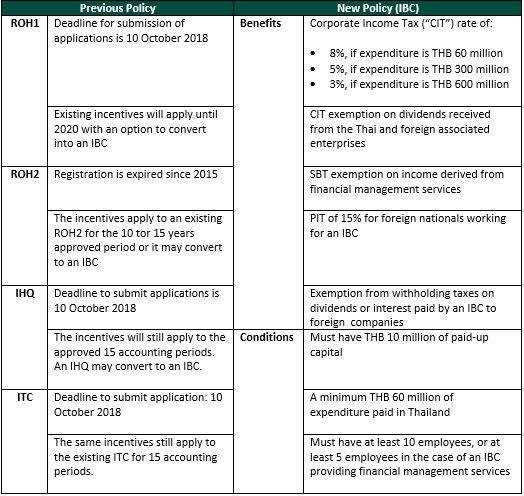 Applications for the existing IHQ and ITC schemes will no longer be accepted as of the date of the announcement on 10 October 2018. Any new applications will be under the new IBC scheme. The IBC incentives are likely to be viewed as less attractive than what was previously available under the IHQ scheme. Under the IBC scheme, income including service fees, royalties and capital gains are no longer provided an exemption from CIT in Thailand. The existing Thai IHQ scheme was starting to become popular as an alternative to Singapore and Hong Kong for structuring investments into South East Asia. The need for high annual expenditures by the Thai IBC may deter companies from establishing a regional presence in Thailand. Companies interested in establishing a regional headquarters or treasury office may look to alternative countries to structure their holding and treasury functions.

We will be providing further commentary on this in due course

Please let us know if you have any queries or if you would like additional information.

The information provided here is for information purposes only, and is not intended to constitute legal advice. Legal advice should be obtained from qualified legal counsel for all specific situations.