The Common Reporting Standards (“CRS”) aims to enable tax authorities to tackle offshore tax evasion by providing a greater level of information on their residents’ wealth held abroad. As a party to the Convention on Mutual Administrative Assistance in Tax Matters, Malaysia already has laws in place to ensure the strict compliance and enforcement of CRS. Chua Wei Min, Director of ZICO Trust Limited, shares her take on the adoption of CRS in Malaysia, as well as the developments of CRS in other ASEAN jurisdictions.

CRS   is   a   part   of   the   Standard   for   Automatic   Exchange   of Financial   Account   Information   in   Tax   Matters   (Second Edition 2017) issued by the Organisation for Economic Co-operation and Development (“OECD”). The OECD developed and approved the Standard to promote and facilitate cross-border tax transparency. 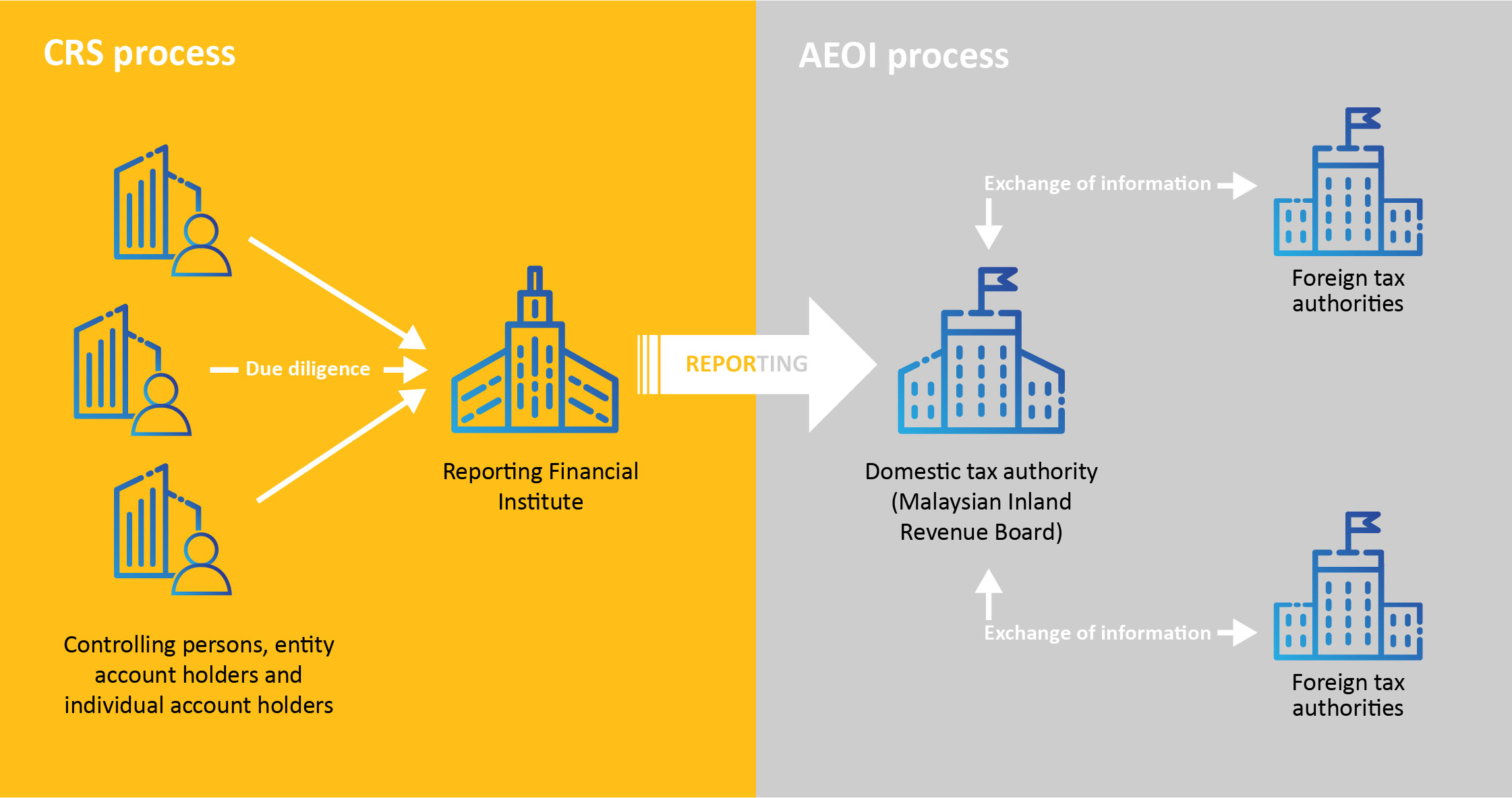 CRS is a standard formulated by OECD to implement the Automatic Exchange of Information (“AEOI”), which   refers to processes for exchange of information developed by the OECD requiring a country to obtain financial information from their financial institutions and exchange that automatically with treaty partners.  The  key  aims  of  AEOI  are  to  enable  tax  authorities  to  identify  non-compliant  taxpayers  and  detect  tax  avoidance  or evasion. Countries agree to participate  in  AEOI  in  various  ways, principally through signing onto the OECD’s Multilateral Convention on Mutual Administrative Assistance  in  Tax  Matters (as amended) (“Amended Convention”), and through legal frameworks like double taxation agreements, bilateral agreements for exchange of information between countries, tax information exchange agreements and the Multilateral Competent Authority Agreement.

As at 11 June 2018, 122 countries have agreed to automatically exchange information for tax purposes under the Amended Convention. Different jurisdictions have adopted different legal frameworks in implementing AEOI. Malaysia is a party to the Convention and has adopted CRS through the Multilateral Competent Authority Agreement signed on 27 January 2016.  The first reporting date of CRS information to the Inland Revenue Board of Malaysia is on 31 July 2018.

This   article   discusses   the   adoption   of   CRS   in   Malaysia, and provides a snapshot of developments in other ASEAN jurisdictions.

Malaysia has adopted what is known as the wider approach where Reporting Financial Institutions in  Malaysia  have  to  identify the jurisdiction in which a person is tax  resident,  regardless of whether or  not  Malaysia  has  a  CRS  agreement  with that jurisdiction. This approach is taken to minimise the need to perform the due diligence process when a new jurisdiction commits to CRS.

CRS is implemented in Malaysia through, among others, the following:

The  CRS  reporting  obligations,  being  now  law  in  Malaysia,  is further    explained    and    implemented    through    the   Guidance Notes and the Malaysian IRB website which provides the following key implementation dates: 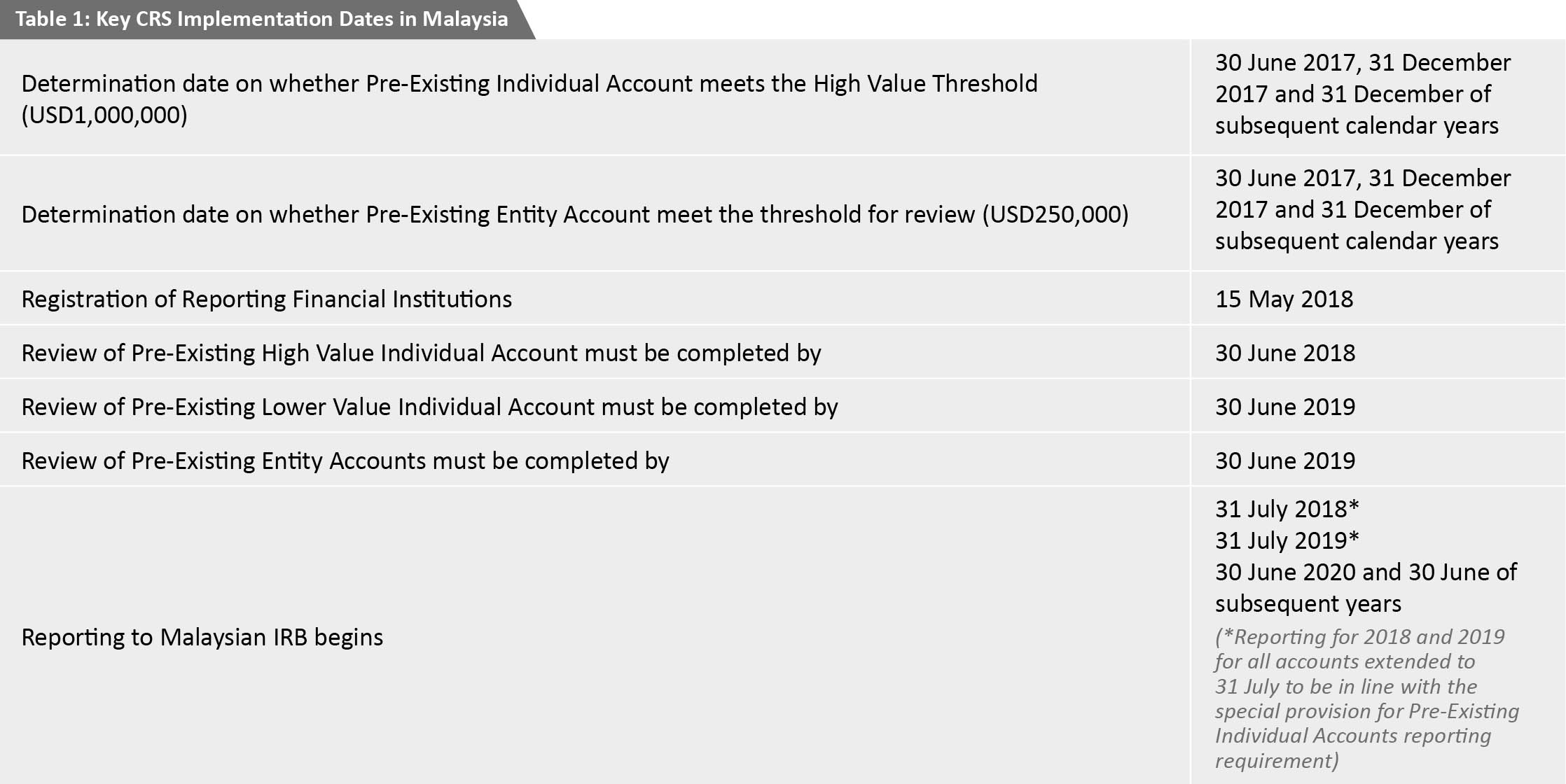 Malaysian IRB has, on 20 June 2018, published a list of 41 Reportable Jurisdictions. Reporting Financial Institutions in Malaysia are hence required to report the Reportable Accounts held by tax residents from these 41 jurisdictions to Malaysian IRB.

Why should we be concerned with CRS?

Entities that are identified as reporting entities within the ambit of the Standard are required to register with Malaysian IRB. Reporting entities must furnish annual reports with prescribed information to Malaysian IRB. This includes specific details on each Reportable Account such as name, address, jurisdiction of residence, tax identification number of the account holder, and the account balance or value.

The following are deemed offences under the relevant CRS laws:

Who is a reporting entity?

Only Reporting Financial Institutions have to register and report to Malaysian IRB. These are: 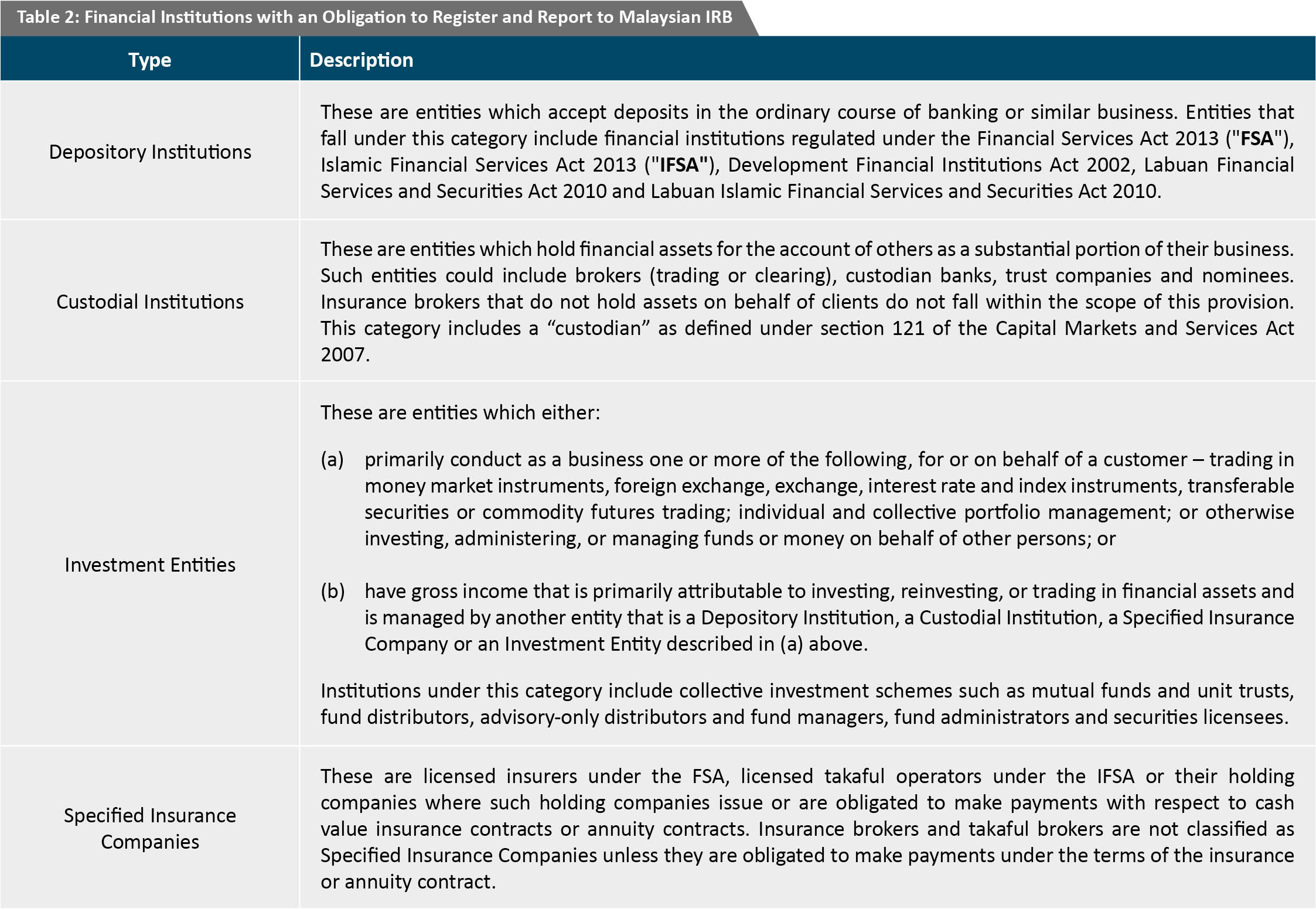 Which entities are excluded from reporting?

Non-Financial Entities (“NFEs”) are of 2 categories – Active NFEs and Passive NFEs. While NFEs do not have reporting obligations to Malaysian IRB, they may be required to self-certify their CRS classification to the Reporting Financial Institutions that maintain their financial accounts.

A Reporting Financial Institution must report Financial Accounts that are held by Passive NFEs with controlling persons that are non-residents.

What accounts are reportable accounts?

Reporting Financial Institutions need only review 5 categories of financial accounts to determine if they are Reportable Accounts. These 5 categories are:

The CRS regime further prescribes that certain accounts are excluded from reporting requirements. These include, among others, retirement or pension accounts, certain life insurance contracts, accounts established in connection with a court order or judgement and certain depository accounts and security accounts that are dormant.

Once a Reporting Financial Institution has identified the reportable financial accounts it maintains, it must then:

Different due   diligence procedures  apply depending on whether the financial accounts are pre-existing accounts or new accounts, and whether such accounts are held by individuals or entities. Reporting Financial Institutions are required to complete the due diligence review in accordance with the timeline set out in cross refer to Table 1.

Confidentiality and protection of information

The information exchanged pursuant to CRS is accorded confidentiality and protection in the form of agreements between participating jurisdictions. Key provisions are summarised below:

CRS developments within the rest of ASEAN

As of June 2018, the only countries within the ASEAN region looking to adopt CRS are Brunei Darussalam, Indonesia, Malaysia, the Philippines and Singapore. Cambodia, Laos, Myanmar, Vietnam and Thailand are, as at June 2018, not signatories to the Amended Convention and have not adopted CRS into their respective laws.

The table below provides a brief snapshot of CRS developments within other ASEAN jurisdictions:

The  scope  of  application  of  CRS  in  Malaysia  is  wide  and  it  is important  to  understand  the  reporting  obligations  as  they  apply not just to  financial  institutions  but  also  to  certain  types of investment  entities.  Foreign  clients  who  are  non-tax  residents in Malaysia need to be aware that their financial information with  Malaysian  financial  institutions  may  have  to  be reported and exchanged with their home countries. These are new standards that Malaysia, and increasingly soon, the rest of ASEAN which have yet to formally adopt CRS, will be adhering to and which  will  be  part  and  parcel  of  how  business is conducted in this region.

Wei Min specialises in cross border corporate and commercial transactions, mergers and acquisitions and private equity, and regulatory compliance. She has extensive experience in advising on legal and compliance issues in foreign direct investments in all sectors and works closely with clients on practical solutions. She is also experienced in private client work involving trusts and foundations (family and philanthropic). She also advises on the use of such structures for commercial and restructuring purposes. She advises trustees regularly on their roles and duties on trust and foundation set ups. She is a director of ZICO Allshores Trust (S) Pte Ltd, a Singapore trust company licensed by the Monetary Authority of Singapore, and a director and trust officer of ZICO Trust Limited, a Labuan trust company licensed by the Labuan Financial Services Authority. Wei Min was the lead consultant in the law reform exercise undertaken by the Labuan Financial Services Authority in 2007 and headed the exercise to revamp the regulatory framework of the laws relating to the Labuan International Business and Financial Centre which translated into 8 new Labuan acts in February 2010. Wei Min commenced her career in 1995 as a legal practitioner in Singapore. Prior to joining the ZICO network in 2000, she practised as a corporate lawyer with major Singapore law firms. Wei Min speaks regularly at regional events organised by the Labuan IBFC and STEP Malaysia on trusts, foundations, charities and related matters. Wei Min also publishes regularly: • Trust Law in Malaysia, Planning and Administration of Onshore and Offshore Trusts, Bloomsbury Professional (2018) • Lexis Nexis, Malaysian Precedents and Forms (Labuan Corporate Module) and Practical Guidance (Offshore Company) (2017) • Thomson Reuters – Labuan Securities and Banking Guide (2018) • STEP Directory Jurisdictional Country for Malaysia (2018) Education and Qualification • Bachelor of Laws, National University of Singapore (Second Class Upper) Singapore • Advocate and Solicitor, Singapore Bar • Registered Trust and Estate Practitioner (TEP) from Society of Trust and Estate Practitioners (STEP)