2018 witnessed the proposed introduction of a number of changes to the employment law regime in Hong Kong, with the Hong Kong Government taking the charge in implementing changes to gradually improve employee protections and employee benefits.

This article shall revisit some of the key events in 2018, and will provide our brief insight on the likely ramifications for employers.

1. Latest Update on Abolishing Offsetting Arrangements under the MPF Scheme

Under the current statutory regime, an employer’s liability to make statutory long service payment or statutory severance payment can be offset by the accrued benefits derived from the employer’s contributions made to the employees’ MPF over the relevant years of service.

There have been years of active discussions around abolishing this “offsetting” arrangement, and in March 2018 the Government put forward a preliminary proposal on how to progressively scrap the mechanism. This has provoked significant uproar from small and medium-sized companies in particular, who are concerned about their inability to pay off large amounts as statutory severance payment or long service payment.

In the Policy Address delivered by the Government in October 2018, the proposal was reiterated but revised with enhanced support for employers (especially small and medium-sized enterprises). In a nutshell, the Government proposed to:

The Government intends to secure the passage of the relevant legislation by 2022, and implement the abolition of the “offsetting” arrangement in 2024.

While the proposed abolition may not take place until 2024, discussions between the Government and the commercial sector will undoubtedly continue. Employers need to keep a close eye on any further developments and ensure that future terminations are in accordance with the new legislation when introduced.

Small and medium-sized companies were immediately concerned about the costs they would be running into, and the ability for them to seek temporary staff as replacement for the pregnant employee. In response to this concern, employers may apply to the Government for reimbursement of the additional 4 weeks’ SML.

Internal policies on paternity and maternity leave will need to be reviewed and updated to ensure they are consistent with the amendments and future amendments.

Where an employee is unlawfully terminated under the Employment Ordinance, an employer was not previously obligated to reinstate or re-engage an employee. The Labour Tribunal, the primary adjudicator of labour disputes in Hong Kong, would usually require consent from both the employer and the employee before an order for reinstatement or re-engagement could be made.

However, this position has changed. Under the Employment (Amendment) (No. 2) Ordinance, which took effect on 19 October 2018, where an employee has been unreasonably and unlawfully dismissed on or after 19 October 2018, and the employee makes a claim for reinstatement or re-engagement, the Labour Tribunal may make an order for reinstatement or re-engagement without the need to secure the employer’s agreement, if the Tribunal considers that the making of such order is appropriate and practicable.

The employer commits an offence if he/she willfully and without reasonable excuse fails to pay the further sum.

Employers can no longer refuse to reinstate or re-engage employees in all circumstances without incurring financial penalty for such refusal.  It is likely that exited employees who fall within the scope of the new legislation will tactically ask for reinstatement in order to impose further pressure on employers and to seek an increase in any damages award.

4. Potential Changes to the Discrimination Ordinances

These proposed amendments include (but are not limited to) introducing express provisions to prohibit direct and indirect discrimination on grounds of breastfeeding, prohibiting racial discrimination and harassment by imputation that a person is of a particular race or member of a particular racial group, and expanding the scope of protection from sexual, disability and racial harassment.

Useful Takeaway: Employers are to be mindful of any latest developments. They should take initiative to raise employees’ awareness of the changes when the relevant legislation come into force and update internal policies or employee handbook to ensure they are consistent with the new protections.

The proposed amendments are briefly summarized below: 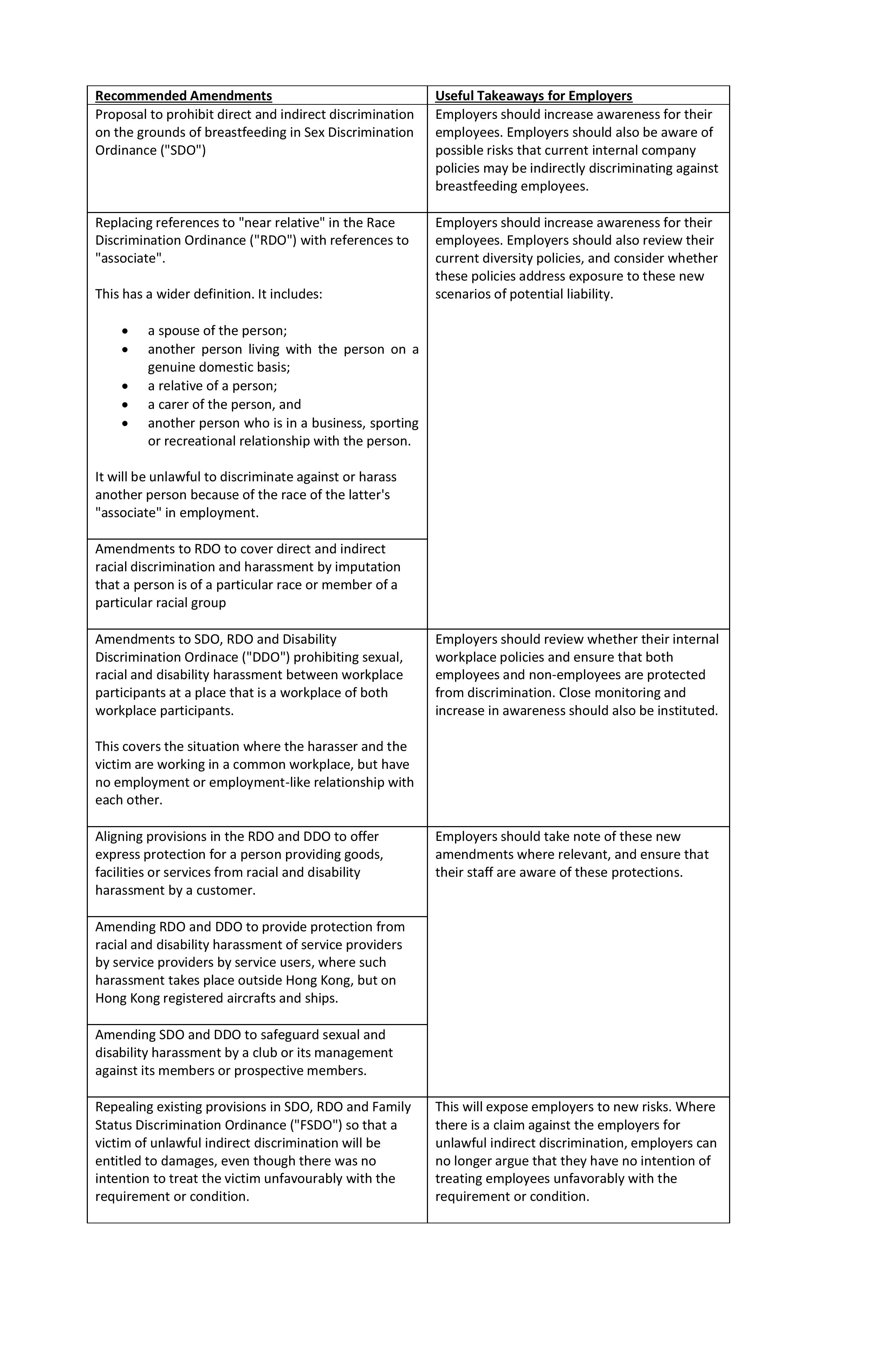 2019 may see more changes to the employment law regime in Hong Kong, with the introduction of an increased statutory minimum wage rate, and a likely proposal by the Government to introduce increased contributions by both employers and employees on the MPF schemes. We would encourage employers to keep monitoring the latest progress on these legislative amendments so that policies and practices can be updated accordingly.

Helen Colquhoun is Partner and Head of Employment, Hong Kong, at DLA Piper. She is triple qualified in New York, England and Wales, and Hong Kong. She advises employers across a range of industries on both contentious and non-contentious employment issues (particularly for international employers requiring Hong Kong, US and UK advice) such as risk management, restructuring, managing employee hiring and terminations, design of incentive schemes, and drafting contracts and handbooks. As a triple qualified employment lawyer with over 12 years' experience, Helen is well-placed to provide a single source of advice for clients who require advice in more than one jurisdiction.