Pros of sandbox regulation for fintech

With the development of the Fourth Industrial Revolution, the application of digital technologies for providing financial services has become the key driver in promoting financial inclusion. However, the industry’s growth will not only depend on investments, new technologies, or smartphone penetration, but will also require a robust legal framework. Le Net and Hoang Nhu Quynh from law firm LNT & Partners, listed as innovative lawyers by the Financial Times in 2015, 2016, and 2019, analysed how Vietnam can accelerate the development of companies within the fintech regulatory sandbox.

Financial inclusion with the participation of fintech companies has been one of the key priorities for many developing countries. Fintech is believed to help customers, especially individuals and small- and medium-sized enterprises (SMEs), access banking and financial services at lower costs and with more accessible procedures compared to traditional banking services. Vietnam is one of the developing countries firmly committed to this development, with reliable infrastructure for digital finances (for instance Internet and smartphone) and a young and interested population.

While Vietnam has a high rate of smartphone users, less than half of the country’s population does not have a bank account, according to the State Bank of Vietnam (SBV), which leads to the rapid growth of Vietnamese fintech companies. Last year, the government took note of the rise of fintech and established a steering committee to improve the ecosystem for the sector. All these factors have given rise to a vibrant tech entrepreneurship scene for fintech solutions.

Vietnam currently has 77 fintech companies. Among the three different product segments – digital payment, personal/retail finance, and corporate finance – digital payment solutions lead the service market share at 89 per cent. As of last month, the SBV licensed 30 intermediary payment service providers, of which the majority offer e-wallets. The most popular names that provide e-wallet services in Vietnam are Momo, VnPay, BaoKim, NganLuong, and Zalo Pay. These activities were licensed under the mechanism of non-cash payments regulated in Decree No.101/2012/ND-CP issued by the government in 2012 on non-cash payments.

Another notable activity in Vietnam’s fintech landscape is peer-to-peer lending (P2P) which belongs to the personal/retail finance segment. There are 40 P2P companies providing a platform for money lending between users in the country, such as Mofin, HuyDong, and BaGang. The lending is believed to help customers, especially household businesses and SMEs access banking and finance services at low costs. The development of P2P lending will also create a new capital supply channel instead of the credit system of traditional banks.

In corporate finance, the introduction of new technologies such as blockchain, with its main applications in cryptocurrencies, draw much attention in Vietnam, especially in the context of the globally skyrocketing rise of bitcoin and ethereum. In 2017, the Vietnamese dong was used by 15 per cent of surveyed cryptocurrency payment companies worldwide. Blockchain has opened new doors for data collection and analyses, and risk management as well as treasury management in the country. However, there is only a limited number of startups working in this field, such as cash2vn, Bitcoin Vietnam, fiahub, and Verichains.

The activities of P2P lending and blockchain are currently not governed by any regulations in the Vietnamese legal system. In practice, fintech companies operating P2P lending or blockchain platforms are only obliged to obtain an enterprise registration certificate. On the one hand, when the companies wish to implement new projects, they may diligently submit official letters to competent authorities explaining its product and service plan to obtain approval.

However, due to the lack of a legal framework, the competent authorities are confused with assessing dossiers submitted and allowing new activities in the fintech market. Consequently, the dossiers are usually pending or rejected, which leads to projects not being deployed. On the other hand, the lack of regulations facilitates many companies liberally operating without satisfying any legal requirements. These operations outwith the control from authorities carry too many risks related to high-tech crimes and fraud or financial crimes, such as theft of personal information, tax evasion, money laundering, or unlawful capital mobilisation. 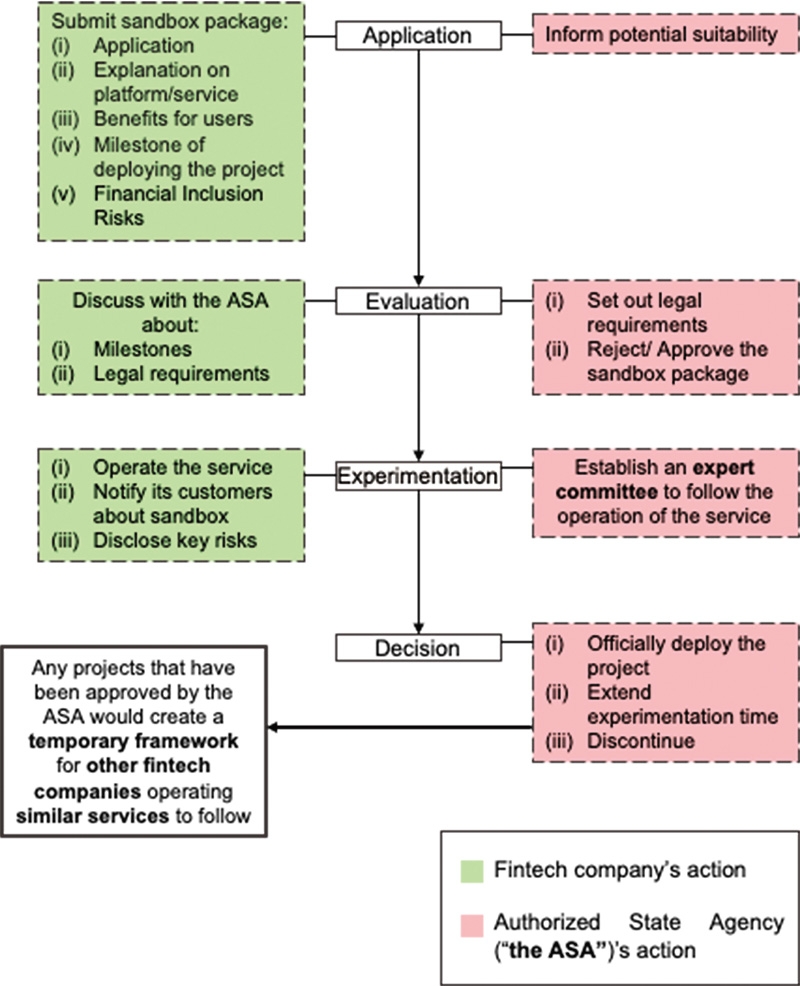 To serve the urgent demand for a legal framework for fintech, Vietnam can refer to the experience of developed countries in the formulation and development of such frameworks. One enacted pilot mechanism for operations of fintech firms is called the Fintech Regulatory Sandbox (sandbox).

The sandbox concept, which was developed in a time of rapid technological innovation in financial markets, is an attempt to address the frictions between different regulators’ desires to encourage and enable innovation. The first sandbox was launched in the UK in 2015, and many countries have followed suit. In Southeast Asia, four countries have formulated and implemented the sandbox, namely Singapore, Thailand, Malaysia, and Indonesia. A sandbox is a framework set up by a financial sector regulator, typically summarised in writing and published, to allow small scale, live testing of innovations by private firms in a controlled environment (operating under a special exemption, allowance, or other limited, time-bound exception) under the state authorities’ supervision. A sandbox typically works as depicted in the image above.

The process can be explained in four stages. During the initial application stage, the fintech company (sandbox entity) shall submit a sandbox package, including four types of dossiers, as stated in the image. Upon the receipt of the package, the authorised state agencies (ASA) shall review the dossiers and inform the sandbox entity about the potential suitability of its package. This information would help the sandbox entity adjust its business and resource planning.

In the following evaluation stage, the sandbox entity would have discussions with the ASA to set out specific milestones for their project, for example, the time for testing and operation or the time for the completion of the experimentation stage. Meanwhile, the ASA would set out a legal framework that requires the sandbox entity to comply with, then approve the entity to proceed. Depending on the service’s completeness and complexity, the package may be rejected by the ASA. However, the sandbox entity is allowed to re-apply. The rejection shall be written and must contain reasons to assist the entity in re-submitting their package.

Upon approval by the ASA, at experimentation stage, the entity shall operate its service only if it has notified its customers that the service is being tested in a sandbox, then disclose all key risks that customers may encounter while using its service. Simultaneously, the ASA would establish an expert committee, including financial, legal, and technical experts to monitor the operation of the service. After the experimentation stage has ended, the ASA shall make decisions regarding the project, meaning decides to either to extend the experimentation time, discontinue the project, or officially deploy the project.

Once the decision on deploying the project has been made, it lays out the framework for other fintech companies operating similar services. Specifically, those companies would still have to apply for a sandbox process. However, they may be exempted from going through evaluation and experimentation stage if they operate similar services to the sandbox entity that have been approved by the ASA.

Each decision shall be based on careful considerations of the ASA after reviewing the pros and cons of the service and feedback from customers.

Using a regulatory sandbox may affect digital financial inclusion in several ways including new, affordable products, or services that address the needs of the excluded customer segments; distribution channels that reach out to dispersed populations in remote and rural areas; operational efficiencies that allow financial service providers to serve low-margin clients profitably; ways to address compliance and risk management barriers to financial inclusion; and increasing competition that may prompt traditional service providers to focus more attention on unserved segments and improve the procedures to keep their revenues steady.

Although the SBV is preparing and will soon issue pilot regulations on the ­establishment and business ­operations of fintech companies, the Vietnamese law ­system is still lacking regulations which allow the operation of such pilot entities in ­Vietnam. Therefore, it is ­recommended that the government creates a legal framework for the sandbox as pilot regulations which are effectively ­implemented in countries around the globe.